ST. ELIZABETH OF HUNGARY CATHOLIC CHURCH
A Brief History of Saint Elizabeth of Hungary Parish
Established 1949
by
His Most Reverend Excellency Charles Francis Buddy
Bishop of the Diocese of San Diego 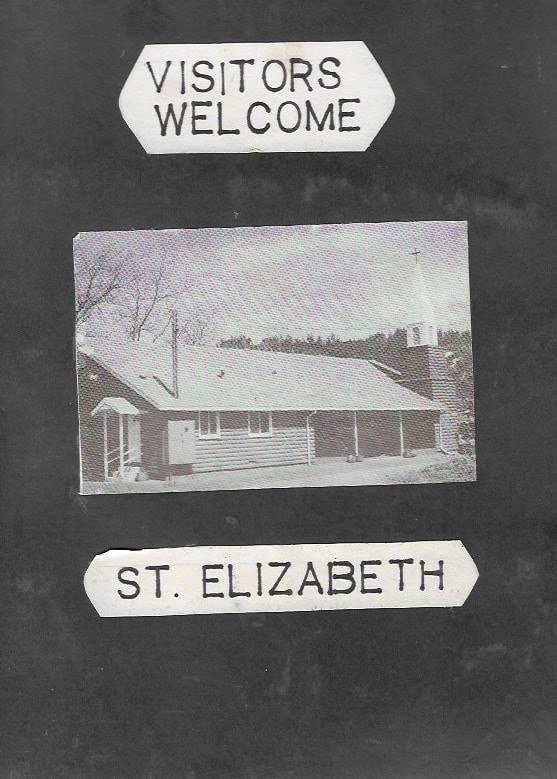 ,
A Spiritual Home of Their Own

During the early years of the post-war prosperity, which led to the baby boom and made The Great Depression a topic for the history books, a small but fervent Catholic contingent residing in the still very rugged mountain town of Julian set their hearts to the establishment of a local parish. The Grands, Farmers, Cauzzas, Andermatts, Angels and other families presented personal appeals to the Most Reverend Charles F. Buddy, the first Bishop of San Diego in the year 1948. Legendary for his “grand vision” for the Diocese of San Diego and encouraged that the handful of devoted families would before long “increase and multiply” Bishop Buddy agreed that Julian was too beautiful and historic to be without a Catholic Church.  By 1949 the faithful would no longer have to travel the dangerous mountain roads to the Mission at Santa Ysabel or all the way to Ramona to the “new” church as the Saint Elizabeth of Hungary parish was at last established.

Father Francis Lobell from Boise, Idaho was appointed the first pastor of the new faith community. Fr. Lobell celebrated Holy Mass in Forester’s Hall, upstairs in the building on Main Street that housed the telephone company’s central switchboard while funds were raised to build the church building. When that location wasn’t available Mass was held at the Women’s Club on “C” Street. Known as the “roamin’ padre” Lobell made his rounds in an army jeep, bouncing over poorly paved roads and trails from Julian to Borrego where he was appointed Administrator to the new parish forming there.

Even before the church was built the promise of a new generation of Catholics was realized with the first baptisms in the newly formed parish. On May 26, 1949, Steven Tomlinson, son of John and Marie Tomlinson received the Sacrament. Less than a month later Jayne Marie Spencer, daughter of Herbert and Joan Spencer, received her baptism into the Catholic faith on June 10.

With the establishment of the parish and approval to build new church granted, the pioneering families turned their energies to raising funds for its construction. People from all over Julian stepped up to help get the church built. Margaret Farmer, Annie Grand, Lillian Cauzza, Lucy Angel, Alice Nida, and Ida Andermatt organized the ladies of the town to sell their home-made pies and cakes at bazaars in the Julian Town Hall to kick start the fundraising. Generous contributions, including labor and materials, from the Catholic and non-Catholic residents and businesses of Julian combined with the women’s enterprise to accumulate enough resources to get the church built.

The men of the parish also did their part to raise up a church on the mountain. Perry Whelan served as the general contractor, Wynn Ryder and George Henderson did carpentry work for half their usual pay. Buddy Farmer, Charlie Andermatt and his son Alan, Fred Farmer, Elmo and Albino Cauzza, Joe DuErmit and his son Bud, Bob Nida and Fred Grand all volunteered their time and talent to the construction effort. Annie Grand and Clare DuErmit often served up breakfast and lunch to the work crew to keep their energy up on the job.

The generosity of the community extended beyond the Catholic parishioners, Ralph Slaughter, Milo Porter, Bud Birdsell all donated time and materials. Henry Silvers did much of the electrical work with Bob Nida as his assistant.

The log exterior was hewn from local trees on Fred Grand’s Volcan Mountain Ranch. Grand had the timber cut and shaped at the Fred Jenning Sawmill. Originally fitted with frosted glass windows, stained glass windows to replace them were imported from Switzerland.

Bud DuErmit recalled with a chuckle that the biggest hazard on the job during the installation of the framing and rafters was jumping to and fro to avoid the expectorations from Perry Whelan’s tobacco-chewing habit as he and the other fellows worked below him. The men and women of Julian worked through the long hot summer to complete the construction of the church.

Consecration of the Church

On October 19, 1949, welcomed by a large congregation of parishioners, townsfolk and all who had labored in so many ways to fund and build the church, The Most Reverend Charles Buddy concelebrated a High Mass with Father Lobell and vice chancellor Father Richard R. Daniels in the new sanctuary. Afterwards, the Ladies’ Altar Society provided a sumptuous buffet for the entire gathering.

The young faith community did not rest on their laurels with completion of the church building but instead set themselves to build a rectory for Father Lobell, who was residing down the road at The Hoskings Ranch. Lobell blessed the new rectory that would be his home on Sunday, September 24, 1950.

In June of 1950 the nation was jarred out of its exuberance when President Truman committed America to war under the auspices of the newly created United Nations, determined to stop the North Korean invasion of South Korea. St. Elizabeth Church saw some of Julian’s young men off to the struggle and offered special prayers and Masses for an end to the conflict, which came with an armistice in July of 1953.

The parish was saddened by the death of their beloved pastor Father Lobell on October 14, 1953. The outpouring of sympathy from the Julian and Borrego Springs communities attested to his warmth as the shepherd of the two flocks.  Father William Cooney was called on to assume the pastoral duties.

A fire broke out in the sanctuary in 1955, reportedly caused by a candle or wiring. Parishioner Emil Wanket recruited his son George from Encinitas to repair the damage to the walls and ceiling. Wanket Construction Company completed the restoration in a couple of weeks.

Bishop Buddy returned to the hilltop parish again in 1959 to bless “Our Lady of the Mountains Shrine” following the Mass on Sunday June 27, 1959. Artist Marjorie Reed designed the setting with gold bearing quartz excavated from a depth of 800 feet at the local Warlock Mine. A background slate, of native pines, manzanita and mountain lilac enhanced the shrine. The statue of the Blessed Mother is carved out of Italian Carrara marble and was donated by Mrs. Theresa Beall a resident of National City who owned a ranch in the Julian area.

Forty years after the construction of the church and rectory, Pastor Father John Wheeler learned that Home Federal was leaving its building on Main Street. Father Wheeler convinced the management to donate the building to the parish. Wheeler Center was dedicated in 1989 providing a place for meetings classes and an office space.

During this time another stained glass window designed by parishioner Carmel Roman depicting the Holy Eucharist was added to the sanctuary on the west side of the altar.

The carillon was added in the late 80’s. The bells toll on the hour and half hour and play tradition hymns throughout the day, broadcasting their beautiful music throughout the historic district and across the hillside. Special hymns and a tolling of the bells have been requested by non-Catholics for burials at the Pioneer Cemetery.

On a pilgrimage to the Holy Land Father Cecilio Moraga purchased a statue of the Holy Family carved from olive wood for the sanctuary. Today it rests on a sculpture stand milled and carved by local sculptor Art Cole from wood he harvested from a walnut tree from the Kenner Ranch in Julian.

Information in this history was adapted from a history compiled by Henry Phelps from recollections and source material provided by parishioners and Julian residents for the 50th anniversary of the parish in 1999.

Thanks also go to David Lewis for providing scanned copies of articles for some of the details.

Special thanks to Ann Reilly Cole, our Parish Secretary for compiling this history of our parish.

Entrance:
The Holy Spirit ~ In memory of August Grand

North Window:
Our Lord, the Good Shepherd ~ In memory of George Sawday