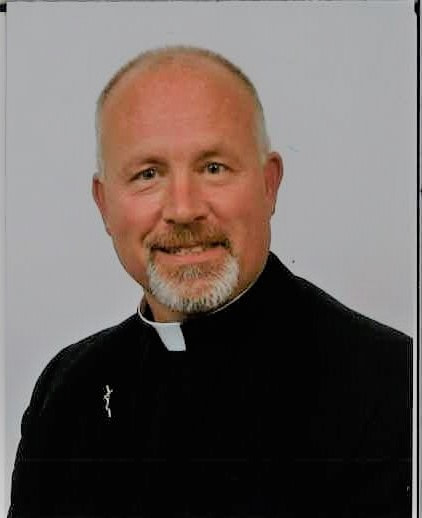 Born 29 August, 1959 in Syracuse, New York the eldest of 10 children to Dolores Hemmer and William Warner Kernan.  Fr. Bill’s family moved around that corner of the country as his dad attained a law degree and was a special agent with the F.B.I.  After homes in Baltimore, Maryland, Rome, New York, Arlington and Arcola, Virginia.  the family settled outside his father’s hometown of Rome, where his father practiced law until his death in October 1992.  Fr. Bill attended three different Catholic grammar schools and three different public grammar schools.  After graduation from Rome Catholic High School, Fr. Bill attained his B.A. in philosophy from Le Moyne College in Syracuse in 1981.  He was commissioned an ensign in the U.S. Naval Reserve on February 12, 1982 and arrived in San Diego on the 1st of March. Fr. Bill qualified as a surface warfare officer on USS Durham LKA-114 then did a tour with the Fleet Marine Force at the 1st Air-Naval Gunfire Liaison Company [ANGLiCo] before going to the Persian Gulf on USS William H. Standley CG-32 in 1987.  He entered St. Francis Seminary at the University of San Diego in August of 1988.  The following year he attended St. John’s Seminary in Camarillo, Ca. from which he obtained a Master of Divinity [MDiv] degree.  Ordained 25 June 1993, he served as an associate pastor at St. Francis, Vista; Most Holy Trinity, El Cajon; and San Rafael, Rancho Bernardo before being assigned pastor of St. Stephen, Valley Center in 1999.  During his tenure the parish church was designed, funded, built, and dedicated.  He assumed the pastorate of St. Charles Borromeo on 1 July 2009.  In October of 2012 he contracted with the Department of the Navy to provide full time priestly ministry to Naval Medical Center San Diego [Balboa Naval Hospital] while residing at St. Charles, Imperial Beach. An avid reader, his hobbies include hunting,  fishing and golf.
office@stelizabethjulian.org